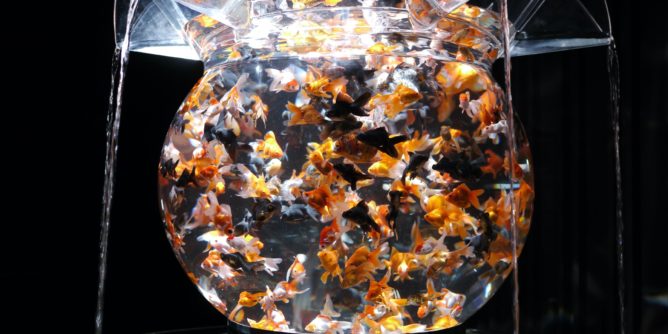 Over 2.5 million visitors across Japan have seen the special exhibition Art Aquarium which features goldfishes in small and big tanks illuminated with changing lights. I have been to the exhibition two years ago when it started in Tokyo. The exhibition is now in Fukuoka and in Osaka. The Osaka exhibition’s tanks vary from the ones shown here.

Japanese people love good illumination shows as can be seen every year in December. The Art Aquarium features both video projections and lighting, with the latter changing color after a few seconds. Thus you can see every tank in different colors.

The tanks itself are also impressive. The exhibition starts with a few smaller tanks which can only be enjoyed if you knee down. Different breeds of goldfish swim in the tanks and while the smaller ones only house a couple of fishes, the biggest contains almost one thousand! Lighting changes between seven colors.

Some of the works combine aquariums with Japanese motives such as the four distinctive seasons.

The big fish tank in red.

Changing of the seasons. This work is using video projectors.

The Art Aquarium will be shown in Fukuoka until May 11. Opening hours are 10 to 18 (Art Aquarium) and 18h to open end (Night Aquarium with various DJs). Entrance is 1000 Yen. Access: The exhibition is held at Hakata City, the shopping/restaurant complex at JR Hakata Station. Go to JR Kyushuu Hall on the 9th floor.