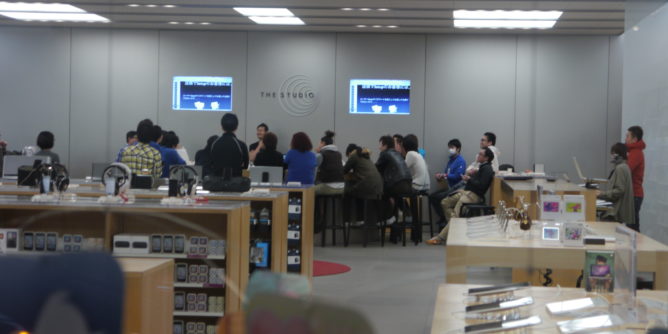 After 11pm most people who want to return home and not spend the whole night singing karaoke hurry to catch their bus, subway or train. I had finished watching the first part of Gantz which was a fine action movie with impressive special effects.

My hostel was in the Hakata area (near JR Hakata Station) and I opted to walk instead of taking the subway.

I came across the Apple Store Tenjin, which looks just like any other Apple Store. They had the MacBook Air on display and I remembered the articles about the Air actually floating thanks to a small balloon.

There were some who believed the original YouTube video was no hoax although people who went to check the story at their local Apple Store quickly found out that the video just used the right angle to make the wires less obvious. So the MacBook Air is not floating. Not even the balloon is floating. Even if it were possible Apple wouldn’t do it because of security reasons – just imagine a notebook floating through the store, hitting every customer on its way!