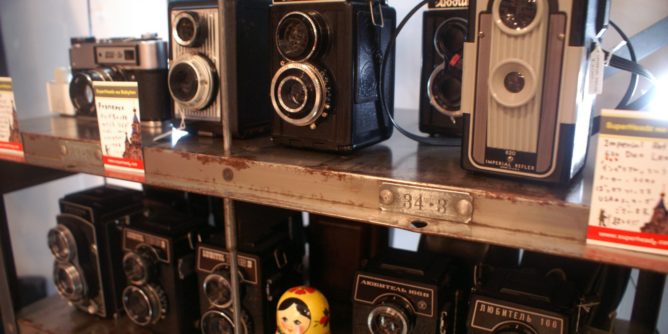 How to find that store? Camera Cabaret is the main shop of SuperHeadz, a Japanese manufacturer of toy cameras. The craze about these cameras is largely fueled by Lomography and SuperHeadz. While they both try to create cameras that are beloved by their owners because of the camera’s deficiencies, Lomo is strictly analogue, while SuperHeadz has various digital cameras (Digital Harinezumi and others). SuperHeadz also takes a more creative approach when it comes to the design of the camera.

I’ve been to their main store in Shibuya before which is not very easy to find. It’s on the same side of the street as the Apple Store and in a small side street 100-200 meters after the Apple Store. The store’s sign is not very intrusive and the shop is on the second floor. Important rule in Japan: Don’t just look straight ahead, look up! Many interesting stores and restaurants are not on the first floor.

After a while, I found the Camera Cabaret store again and found out that it has been turned into a Lisa Larson store. But it’s still a SuperHeadz store! There is a connection between the Swedish artist and the toy camera manufacturer: She designed the Necono Digital Camera which is SuperHeadz’s first original digital camera after the Harinezumi. The Necono is even tinier and looks less like a camera than the Harinezumi and doesn’t even have a display. Magnets at the feet of the cat allow for creative shots without a tripod. The camera is very expensive (15750 Yen) and image quality seems to be similar to the Harinezumi 2 – rubbish in any situation other than sunlight. The Necono was the only camera that the old store sold besides various ceramics by Lisa Larson.

The “real” store is now somewhere else…

The real store moved to another location in Shibuya, the “Shower Room Factory”. It’s next to the tracks of the JR line, which makes the store slightly easier to find. You leave JR Shibuya Station to the exit of the bus terminal (not the Hachiko exit) and you will immediately see a big overpass. Cross the street and exit on the left. You should see a store called “薬京都ダイコク” and next to it a store called “Ikebe”. There is a small street between Ikebe and a ramen restaurant. The street runs next to the tracks of the JR line. Walk down that street. At some point it won’t be possible to walk next to the tracks, so just make sure to follow the tracks as closely as possible.

On my way to Camera Cabaret I passed Seven Guitars, Pile Cafe and walked under a bridge.

This structure is opposite the Camera Cabaret building:

… and this is the building where you can find the store!

It’s easy to overlook this building, as there are no signs except if you walk to the entrance:

Interestingly, the store seemed to be closed at first. But there is a sign that says that they have sensors alerting their staff of the presence of a customer. Just one minute later one staffer came rushing to the gate, opening the store and activating the sound system!

The new (or temporary) store is more spacious and offers various Holga, Harinezumi, Blackbird, Vivitar, Russian and other cameras. Like the old store, music is part of the store’s concept, therefore various CD’s are sold there too. Since film cameras are a big part of their products, they sell various films. If you’re thinking about picking up a camera there, you should research first on the web, especially if you’re interested in a digital toy camera. Much too often they just seem to toss a cheap cellphone camera sensor into a nice case. This is just bad quality – but toy camera fans look for bad quality with character!

The store is likely not very important for SuperHeadz, their cameras are widely available at other Japanese stores. If you are unable to find the Holga in white however, their store is the best bet.