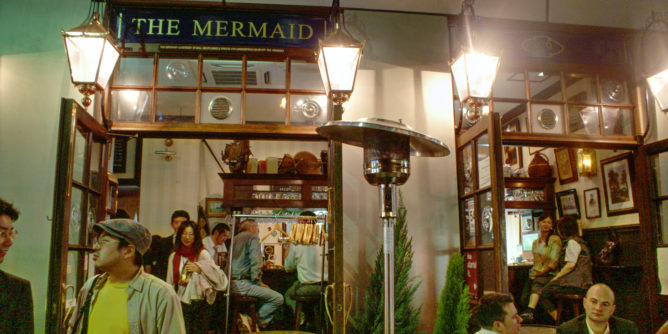 I have developed an addiction for meetup groups. Having just attended only one (the Spider-Man 3 meetup), I have already subscribed for a few others – I probably only left out the “Left-handed Spanish expatriates who are speaking Swedish only group” 😉 So today it was time for the second meetup, a different group and a different location: the Mermaid Pub in Akasaka. It’s an English pub and the location was chosen by the “The Tokyo Japanese-English Language and Culture meetup group“. It’s basically a bunch of friendly Japanese and foreigners who will talk to each other in English or Japanese. The capability of speaking in a foreign language varies greatly.
Often it’s a mix between both languages. I tend to forget names (which is probably a good thing on the internet), but the Japanese sitting next to me was really funny and what is even more interesting is that he made the same experience concerning penpals: He’s got a German penpal, visited her in Germany and it didn’t turn out that well. They are not writing each other anymore.

Now my penpal also did seem cheerful, I visited her in Tokyo and it didn’t turn out that well. We’ve broken the contact ever since.

At about 22:30 pm everyone went their seperate ways and I went back to Tabata and walked the 20 minute distance from the station to my appartment.

You can see some additional photos here – most were taken by Wye-Khe with my camera.