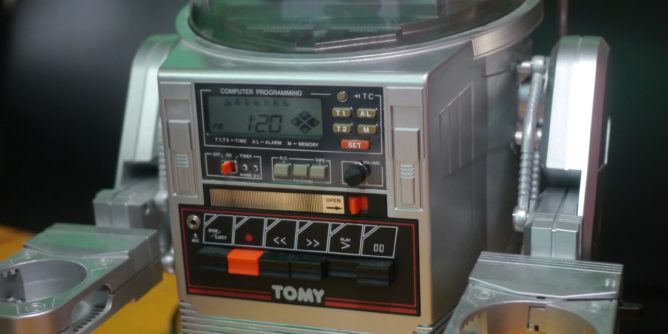 Just like any other kid, I liked toy stores. One German toy store called “Spielwahn” in particular seemed magic to me. That store didn’t sell action figures, Barbie or board games but a range of games and robots by the Japanese manufacturer Tomy. Since then, I have a soft spot for that company which even to this day continues the tradition of quirky toys, most of which will never make it outside Japan.

This book is the Omnibot fan book and was published in 2007 by Mycom, coinciding with the release of Tomy’s humanoid i-SOBOT. The pictures on the cover are not in scale as the i-SOBOT is merely 16cm (6.5″) tall, about a quarter of the size of the Omnibot 2000 pictured on the left. The quite agile successor to the Omnibot range came out in 2007 and that particular toy store in Germany had long been replaced by a shoe store by then.

Going back to that 80’s toy store, the Omnibot was the king of robots at that place. Its shape resembled R2-D2 and the complicated buttons on the front promised many features. Simple programs could be put on cassette tape and the robot was also able to carry light items using the supplied tray. Also in the box was the remote control which is essential to using the Omnibot. The robot was released in multiple colors, although the white one is the most common. But what about the black Omnibot?According to the book, Tomy prepared a black Omnibot which would feature stereo speakers and a CD drive instead of the tape deck. The plans were eventually shelved and there’s no mention how you are supposed to store programs on CD. I haven’t found any information about the black Omnibot outside the book in Japanese or English.

The Omnibot was pricy but promised hours of fun. Tomy released the Omnibot MkII one year later whose main new feature was support for extensions like a photo sensor or security detector. The latter would switch on the tape recorder if an intruder is detected. Later models abandoned the R2-D2 look and went for a more Johnny 5 (Short Circuit) or Roboz (Riptide) look with a clear defined distinction between head and body section. Modders also took interest in the original Omnibot, equipping it with Bluetooth, voice module, camera or an Arduino mini computer.

The Omnibot was a dream machine to me but way too expensive. But I was proud of a non-Tomy robot-shaped toy which could produce various sounds.

Tomy had lots of other robots released before or shortly after the Omnibot. Most of them were available, and could be seen in action on a big plate in the centre of that store.

The Armtron (1982) was a robot arm controlled by toy small joysticks. It was able to grab very small items, provided they were in the right shape. I was more interested in the Chatbot, also known as the 4U-U-20. The Chatbot resembled a shrunk Omnibot but was non-programmable. It was controlled entirely by a remote control and could play sound from a mini tape. Interestingly, there was a Coca Cola themed version of the Chatbot.

Other “Bots” were the Flipbot that could get up by itself if it fell over, the Potch (Spotbot) and Nyanko (Japan only) two robot animals, the Enpitsu Kaziri (Kaziri) for sharpening pencils and Zenimaru (Mr. Money) which stored your precious Yen coins.

One other Tomy robot that got my attention was the SO-G (Dustbot). The Dustbot came with a tiny brush and could be seen as the predecessor of cleaning robots. How could such a small thing clean up a table?

The Omnibot Fan Book is just 93 pages long but is packed with information about the history of Tomy’s robots from 1961 to 2007. The first twenty pages are dedicated to the then-new i-SOBOT explaining the features, showing concept drawings, interviews with the creators and a commentary by Takara-Tomy CEO Tomiyama Kantaro. Next is a visual timeline of Tomy’s robots starting with Mr. Mercury (1961). Part two of the book features the Omnibot and other Tomy robots released in 1978 and later: brief introduction of the features, package design, advertisements, accessories, catalog scans, stills from commercials and messages from robot collectors. For the robots which saw a release outside Japan, the international name is mentioned as well.

The book captures the fascination of these 80’s robots and I still take it off the shelf to flip through the pages.