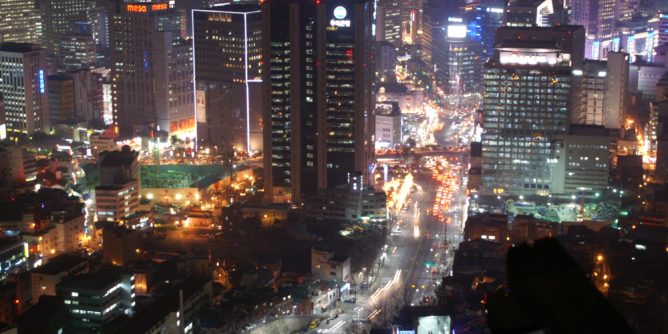 The people in Seoul found a clever way to enhance the reach of their television tower: They built it upon a hill. The N Seoul Tower (North Seoul Tower) can be easily seen from most parts of the city, especially at night, when it’s illuminated. Unlike Hamburg’s TV tower which is near some exhibition hall and has no entertainment facility at all, the Seoul tower houses shops, an observation platform and many other things.

Although there is a cable car, I walked by foot up there. It’s quite an interesting hike and you can take a look at the skyline from various points. The place is popular with young couples. The most impressive platform is made out of wood and gives you a 180 degree view of the city below. At that time you are already at a spot higher than the buildings in Seoul.

However, a tripod is an absolute must, though you can get a steady support for your camera at this platform.

From there on, it was just a short distance to the tower. The area around the tower is quite interesting, blending modern with classic architectural elements. The shops include a gift shop (mainly selling notepads and other writing utensils), a “character & photo” store (used for posing with “celebrities”) and more.

The entrance to the tower is actually below the tower itself but quite clearly marked in multiple languages. I don’t know how many people frequently visit this tower, but there were quite a lot up there – too much to use my tripod. But then the view was not that much different from the one at the platform – maybe it’s different in daylight.

Printed on glass are some places and the distance. Only 1157,99 km to home – guess I can walk back to Tokyo then.

To make sure that kids don’t get to impatient while waiting for the elevator, they had a clown there, creating dogs and swords out of balloons.