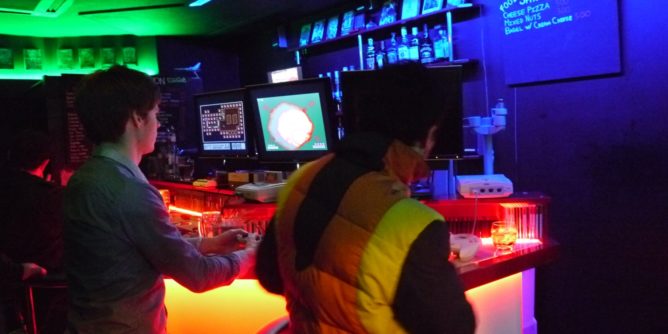 A while ago I stayed in Osaka for New Year’s and was unsure where to spend the evening. So I decided to check out Space Station Osaka, a video game bar in the Americamura neighborhood of Osaka. You can get drunk while playing Atari, Nintendo and Sony games.

The free magazine which mentioned the bar didn’t include a map or a good photo of the place, so I was wandering around trying to find it. There is a small sign in front of the stairs which leads to the bar.

Inside is a row of flat screens and classic consoles. The bar has both the NES and the Famicom, Super NES and Super Famicom, Mega Drive, Dreamcast and more recent consoles such as the Wii and PlayStation 3. There was even an Atari VCS in a corner, although I can’t imagine someone playing it.

I picked the Dreamcast first because mine is broken and Jet Set Radio is one of my favorite games. The bar doesn’t have a great selection of Dreamcast games yet. Unsurprisingly, many games were for Nintendo 8-bit: Retro game shops are full of Famicom games.

Would I recommend Space Station? If you are a foreigner with little Japanese knowledge and love games, certainly!