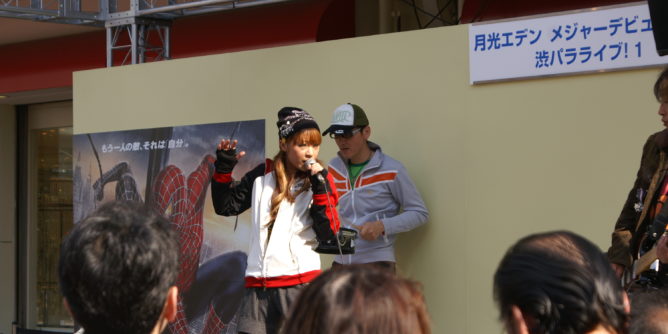 There are hardly any people who ring the doorbell and the bell has an awful sound. So I’m always shocked if I hear my doorbell and today it was not the postman: It was someone from the local police. I immediately thought that a crime happened in the neighbourhood (alright, I’m paranoid) but he was merely there to check who is living in the rooms what their purpose of stay is, name and so on. He spoke little English and I guess I was too nervous to form a few meaningful sentences in Japanese but I guess he will return next month or so. It’s a good idea to always know where your passport is since the visa stamp explains a lot. He was checking the other tenants as well and there was no inspection of the rooms or anything like that, just 4, 5 questions and we were done.

After that I went to Shibuya to look for the Nanzuka Underground, an art gallery. Although I had a map, this location turned out to be pretty hard to find and I gave up after a while. Before I went looking for the gallery, I listened to some music coming from a public stage at Shibuya station. They played some good rock music.

After I gave up looking for the gallery, I found a small shrine where you have to climb up some stairs to see it. Maybe that’s why it was empty and situated in the middle of a shopping district it was surrounded by tall buildings.

When I arrived home, I took a nice sunset picture from the Odaibashi bridge.