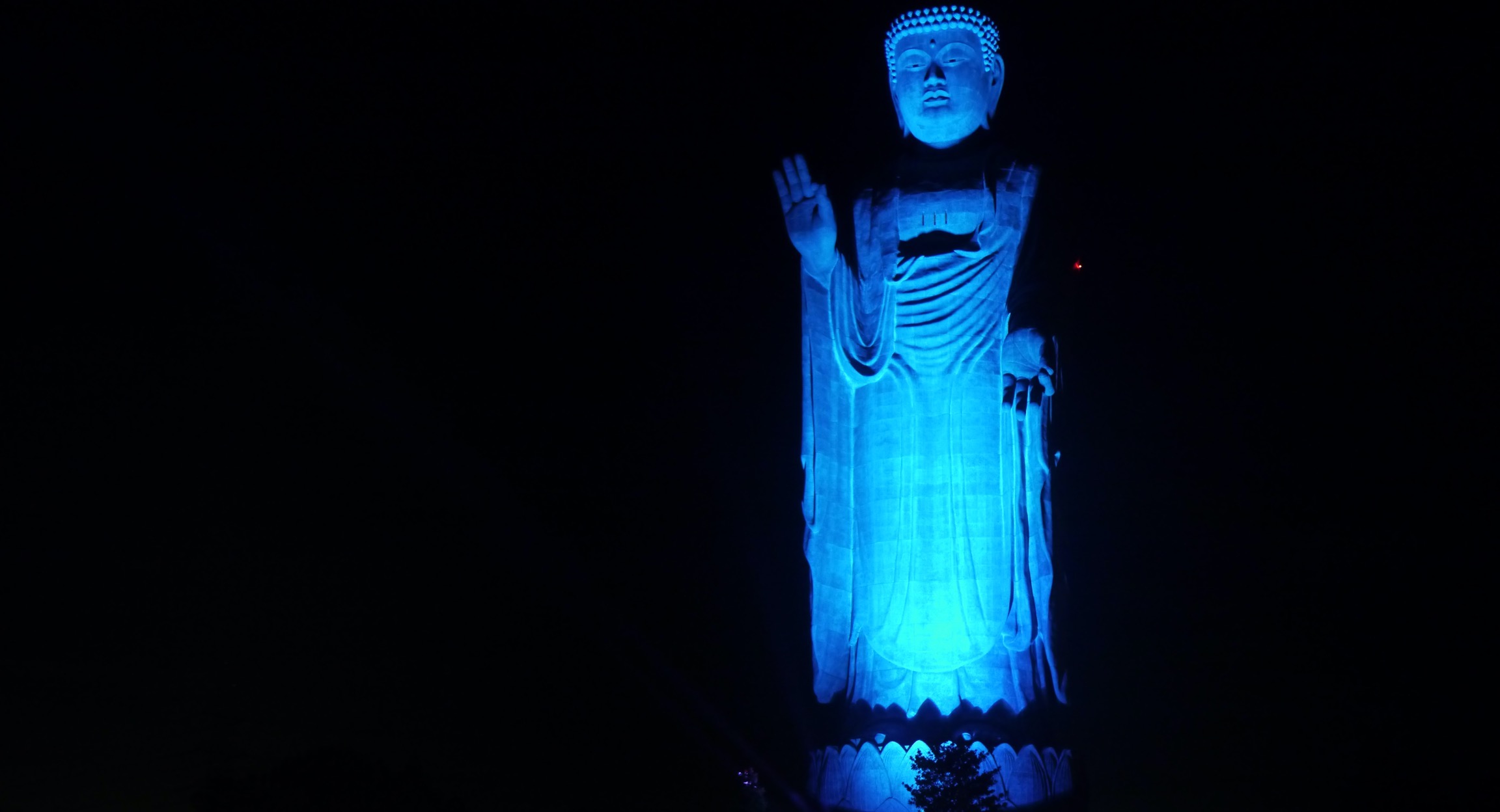 Talking about Japanese towns with great Buddha statues, one would likely mention Nara or Kamakura. But the Ushiku Daibutsu dwarves them all: At a height of 110 meter it is one of the tallest statues in the world. Every year on August 15, there is a light-up and fireworks festival and this year I decided to skip one traditional fireworks festival in favor of the Buddha plus fireworks combination.

Arriving at the station, there was nothing indicating that there is a festival in Ushiku. The Buddha is also not visible from the train station or anywhere in Ushiku. Bus service was scarce, so I took a taxi to the Great Buddha (about 3300 Yen). It is quite a distance from the station to the Buddha.

Ushiku Daibutsu has probably more parking spots than some shopping malls and they expect their visitors to stay a while. You’ll pass various shops on the way to the Buddha. Usually there is an entrance fee but on the festival day there was none from 5pm. However, I couldn’t enter the statue which contains a museum and an observation floor.

The statue was built in 1993 and depicts the Amitabha Buddha, it was built to commemorate the birth of the founder of the “True Pure Land School” of Buddhism.

The festival is as massive as the statue: There is a sea of lanterns around the statue, which is illuminated in various colors. There were also some lanterns floating on the water but access was blocked. Unlike normal fireworks festivals, there’s no need to come early to reserve a good spot.

The fireworks show was surprisingly short. However, they were shooting rocket after rocket with almost no pause in between. Usually there would be periods where only few rockets are launched. The pyrotechnicians at Ushiku certainly didn’t have time to waste. There were a few rockets launched later, but the main event was over after about 10, 15 minutes. I also expected more fireworks in front of the Buddha, but most was just next to the statue.

It made sense for them to have a short fireworks show. The fireworks started at 9pm, at 10pm the stalls would close. Most people were leaving after the show, causing a traffic jam around the Daibutsu area. I immediately went to the bus stop, but apparently the bus was stuck in the traffic jam too. I overheard someone saying that it’s unlikely that taxis would come up at this time all the way to the Daibutsu and I, like some others, was afraid that I wouldn’t make it back to the train station in time. Ushiku isn’t a place you want to be stuck for the night.

Everybody was relieved when finally two busses arrived. Even with the traffic, I still made it to Ushiku Station in time to catch a Joban line train heading for Ueno Station.