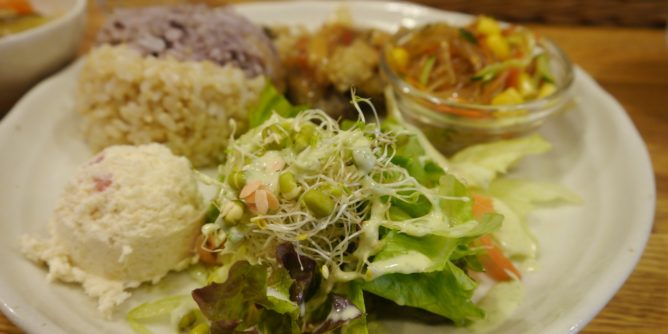 Nakano Station is only five minutes away from Shinjuku via the Chuo Rapid Line. The area around the station is popular with manga and anime fans (Mandarake) and shutterbugs (Fujiya). Some vegetarians come here because of Govinda’s, an Indian-style vegetarian restaurant. Govinda’s is not part of Nakano Broadway or the Sun Mall and some people complain that it is hard to find.

Actually it isn’t particularly hard to find and not that far away from the station either. After you arrive at Nakano Station, take the north exit for Nakano Broadway/Sun Mall. You will see a bus stop and the mall in front of you and a painted wall on your right. Turn right and walk until you see Cafe Karma (which is a nice place too, by the way). Turn left into the small side street. You will pass a restaurant and the LIFE super market.

This area is full of small restaurants, record shops and shops which cater to otakus. After about 100 meters, you will see this building on your right:

The side street next to the building is the street that leads to Govinda’s. Walk down that street until you see Govinda’s on your right. This is for the most part a residential area. If you don’t pass the Mini Stop convenience store after ten meters, you walked down the wrong street 😉

I recommend the daily menu (higawari menu; 1050 Yen lunch, 1150 dinner) which is very healthy and also comes with soup and tea. I don’t think I ate healthy in Tokyo, so I usually went to Govinda’s once a week. They also have a point card system, if you have enough stamps you can select one cake. Yummy!

Govinda’s was open Tuesday to Friday. Lunch from 12pm to 3pm, dinner from 6pm to 9pm. Open on Saturday from 12pm to 9pm and on Sunday from 12pm to 8pm. Closed on Mondays. Unfortunately the restaurant closed in December 2012.