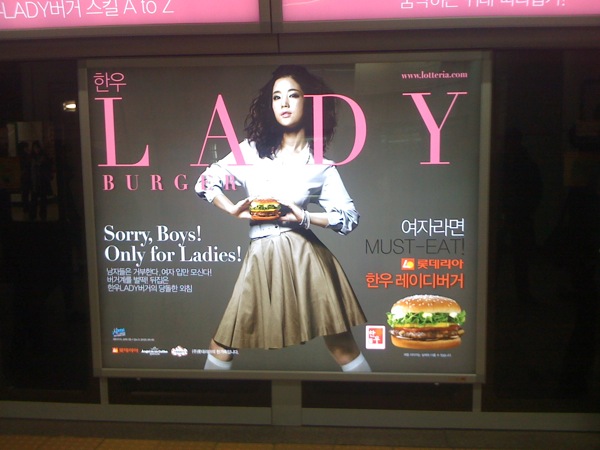 Women and men are different which is true to a certain degree. There is no shortage of studies about the topic and since the ones that connect everything to genetics sell well, most people think that there are more differences than there are. Actually there is nothing that stops girls at being as good at maths as the boys. Socialization though can be difficult to explain, much harder to explain than, for example a gene which forces men to cheat on their wives. Anyway, I want to talk about odd advertisements.

The photo above is not an odd cover for a women’s magazine but an advertisement for Lotteria’s Lady Burger. The text makes it clear (in English and Korean!) that this burger is for ladies only. The burger is even called “hot style” and an “it item”. The lady though doesn’t seem to know what to do with the burger and mistakes it for an accessory to accentuate her waist. That’s a good choice since even a burger with less calories is not healthy food. If you order it, the burger will be wrapped in pink – just in case your boyfriend mistakes the burgers…

… because, after all, men don’t know what do with burgers:

This is an ad for a different burger but much like the Lady Burger ad, the person doesn’t seem to know that people usually eat them. Instead, he screams at the burger and gets cozy with it. Ewww! So men don’t know what to do with burgers and women don’t know either 😉

But at least guys can drive cars, right? Well, it depends!

This is the commercial for the Hyundai Accent which is marketed as a men’s car. Nothing wrong with that and it’s a big enough target audience. However, in the spot they actually narrow it down. Just because of what you have between your legs doesn’t qualify you for the “Guy’s License”. You should be fast (in case someone steals the car), not too young and not too old. It also helps if you have an aversion against wearing a shirt. Note though that shaving your body hair doesn’t disqualify you for the guy’s license.

Of course what Hyundai tries to do is getting a well-defined image for their product by narrowing the potential customers to young, shirtless men. Marketing a product to a certain group only can be more successful than marketing it to anybody. I keep thinking though – what happens if the guy gets older or if he wants to wear a shirt? Is the Guy’s License revocable? And does losing your license qualify you for eating a Lady Burger?

Instant noodles to the rescue

So what’s left for a man without a guy’s license or a woman who doesn’t consider herself a lady? Instant noodles.

These instant noodles are sold by Korean convenience store chain GS25. There is one in red for the women and one in blue for the men. The woman seems to have a slight problem with her left eye, while the guy looks slightly overweight. The male ramen has more meat and calories. Personally, I would choose my meals depending on taste, nutrition and calories and not on the gender.