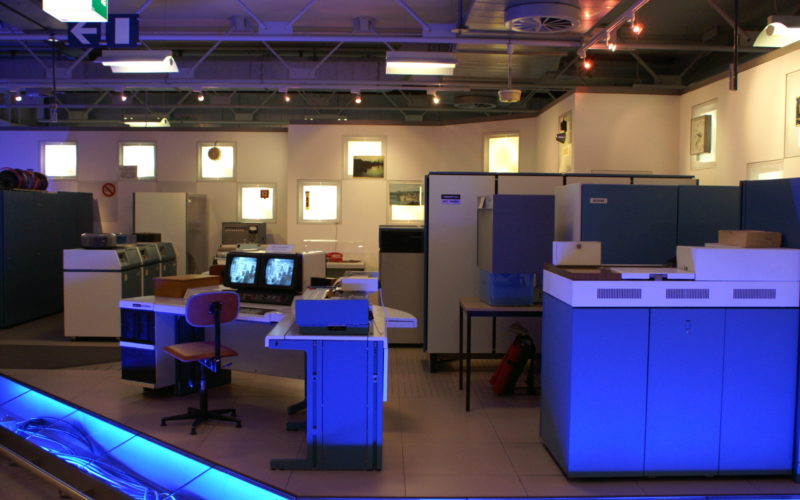 Paderborn is in the north of North Rhine-Westphalia but is interestingly connected to Hanover (Lower Saxony) with the S-Bahn line 5 (other cities in Lower Saxony are still not connection to the S-Bahn). One of the town’s attractions is the Heinz Nixdorf Forum (HNF), the world’s biggest computer museum.

There is one bus that stops directly in front of the museum, but it’s advisable to look at the time table for the trip back.

The museum shows various communication machines, computers built out of relays, encryption devices such as the Enigma, an early Linotype printing press and the first kit computers such as the Altair 8800. There is a big gallery with pocket computers an areas where it is shown how computer workplaces looked like 20, 30 years ago. Among the more modern machines shown: PET, Sol, ZX80, C64, Tandy, Mac 128k, Apple Lisa, TI99/4a, eMate, Osborne-1, IBM-PC and Atari ST. The Atari was shown as a MIDI music machine (MegaST) and a home computer (1040ST). A few notable game consoles (NES, Pong, Brown Box, Game Boy) were also exhibited.

While there are some exhibits to try out, the museum is not a hands-on museum.

There is also usually a special exhibition and that was where I had some fun on a driving simulator. A fitness bike was connected to a computer, the display in front showed the track. Unfortunately I got that the uphill part which left me a bit tired afterwards. Not something to try out was the high-tech toilet from Japan and a muscle enhancer.

There was little time left to explore Paderborn a bit, plus it was getting dark and it started raining. I can recommend the HNF, it’s quite big and well organized.