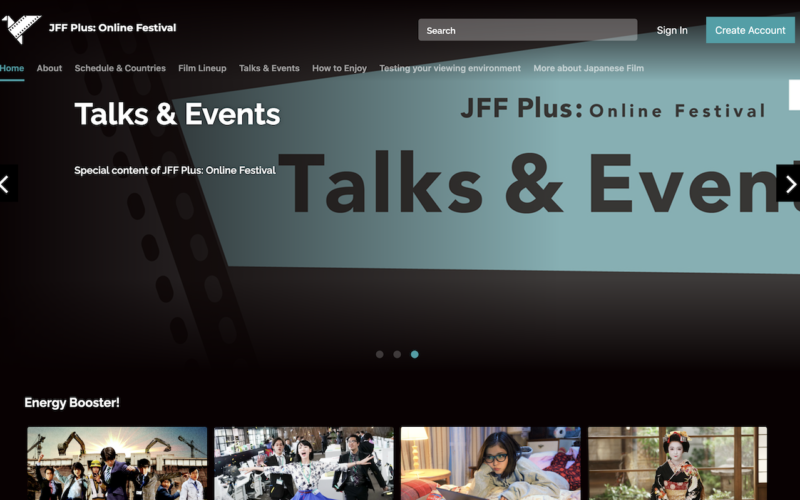 With the pandemic, film festivals worldwide face the challenge and opportunity to take their festivals online. JFF Plus is scheduled to run until March 7, 2021 and was initiated by The Japan Foundation.

The Japan Foundation is not a newcomer to showing movies: I’ve seen lots of movies – both classic and newer ones – at the Japanese Culture Institute and they also held two online editions featuring independent movies. For two months, you could stream each of the movies for free. There were also film festivals held in various Asian countries organized by the Foundation.

JFF Plus is an entirely different thing. In a way, it combines the worst from offline and online festivals.

Mostly newer movies from 2018 to 2020. There’s some documentaries, various animation films in different styles and a selection of live-action drama, comedy and romance films. Among the drama ones is The Great Passage, Japan’s pick for the Best Foreign Film Academy Award (it wasn’t nominated). All movies are in Japanese with a plethora of subtitles, representing the language diversity of the places where the online festival is held.

Ideally, an online festival should know no borders. But licensing is a pain – and this is still a free festival after all. While other festivals chose a date for all countries and activated geo-restrictions based on the user’s location, JFF Plus split the countries in groups and offered the movies to each group for the festival period. JFF Plus was held in the Philippines, Malaysia and Thailand from November 20-29, 2020. Group 5 (the last group) consists of Egypt, Germany, Hungary, Italy and Spain and will commence on February 26, 2021.

There’s another caveat limiting the flexibility further. Each film is activated on a fixed date and at a scheduled time. From the scheduled starting times, they are available for 24 hours only. Let’s say you want to watch Little Nights, Little Love and you live in Germany. While the festival starts on February 26, the film is available on day 10, March 7th at 11 AM CET. Fortunately the timetable makes sense – it’s always two feature-length movies and one short film.

JFF Plus has no app and relies on the browser. On my Mac, only Safari is supported. Before the first film, you’re required to create an account. I’ve also successfully tested the stream on a Fire TV with Amazon’s Silk browser.

JFF Plus isn’t a replacement for the offline festival which will still be held in the future. The inflexible schedule is somewhat disappointing, but after all, JFF Plus is free. I hope that Japan Foundation will continue this festival as well as the independent movie showcase.