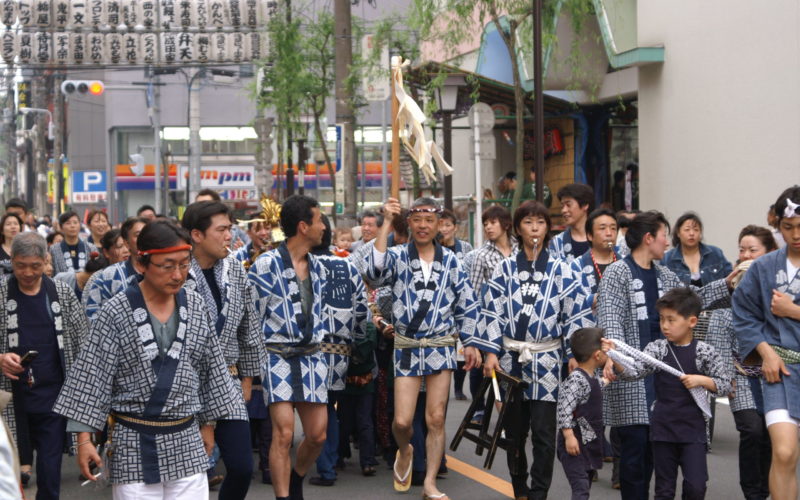 One of the biggest shrine festivals in Tokyo is the Senso-ji matsuri. Lasting three days, it is held each year in May and you can see lots of portable shrines of various size.

On this day it was no problem to find the shrine – just follow the crowd. The area around the shrine was full with food stands and various shops. It didn’t take long until I saw the first mini portable shrines carried by children dressed in traditional clothes. There were always some grown-ups present and they did make frequent pauses.

After that I explored the shrine area a bit. While the cucumber looked tasty, I decided on eating some Yakisoba. I still had some time left until the big portable shrines would show up.

The shrines were carried through the streets around the shrine. It’s not a great procession though, they were shouting and usually accompanied by a crowd taking photos or supporting them. But the greatest attraction for the various photographers weren’t the shrines – it was an elderly man wearing a flower hat. He did wear the hat with a lot dignity and was more than willing to pose for a few shots.

A few more smaller shrines passed through and a bigger one was approaching. A group of maybe seven or nine Japanese prepared their digital cameras and everyone pointed at the same target. The shrine? No, a dog? Just a small dog, nothing special, but they did seem to find the dog more interesting than the shrine. The dog was mildly confused.

It is fun to photograph the people carrying the shrines. Some are smiling, others seem to be very tired, another cheered his colleagues and one funny guy even found the time to make pose for a shot, slightly mocking all those photo-addicts. And if there’s one thing more important than carrying a shrine, it’s answering a phone call…