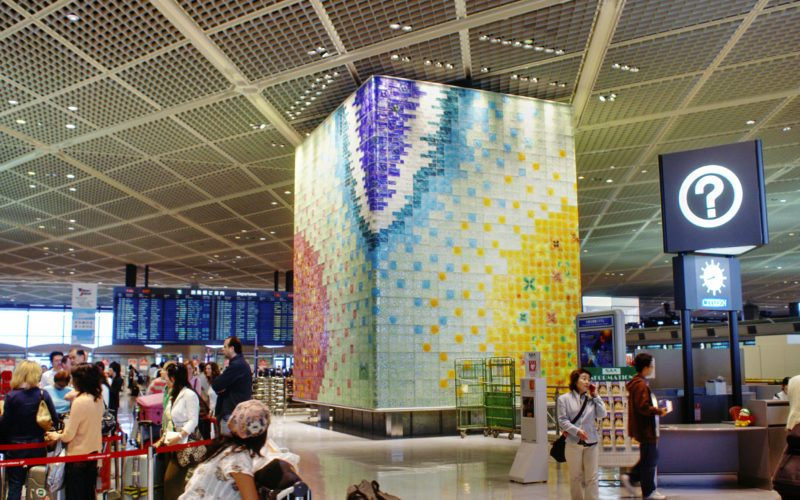 I honestly don’t know how I feel. After about three months in Tokyo it’s time to fly back to Germany. I’ll probably miss all those nice meetups and of course the city itself which is just an exciting place to live. I certainly don’t regret booking the hotel in Narita because that gave me an extra city trip (the last one in Japan for a while) plus there is a handy shuttle bus service to Narita airport. There was a very brief stop at the gates before the terminal with police men (and women) who looked at every passport.

It was a good thing that I came early, because the check-in took much longer than expected. The man who lifted the bags for the xray inspection said to me in an amused tone: “Oh, you’ve got lots of souvenirs, right?”

Those Naganuma books surely weigh a ton 😉 I got an older woman at the check-in counter and was surprised that she did speak in Japanese (my impression is that they start talking in English if there’s a foreign looking person in front of them). I did the whole check-in procedure in Japanese language – and even without having a “Mr. Braun from Germany checks-in” chapter in one of my Japanese books, yay!

No time for sleep in the airplane, though, because I had lots of films to watch. Including “Das Leben der anderen” (in German), “Night at the Museum” (in Japanese), “Hak Bak Do” (in Chinese), “Flushed Away” (in English) and “Babel” (in English, Japanese, some other language). There was also another Dr.Who episode which I just needed to watch.

If you know at least half of the films you will know that this is quite an odd collection of comedies and dramas. My favourite was Das Leben der anderen, a very touching story about the “relationship” between a STASI man and an artist. Flushed Away comes next – I liked Wallace & Gromit so I was a bit sceptical about this computer-generated film. There were many funny references to other films and I especially liked the slugs who just popped up in some scenes, grinned and sang some songs. They should get their own movie!
The next three in alphabetical order. I was a bit disappointed of Babel. It contains three stories which are linked together (although the link between the Japanese story and the two others is very very weak and feels constructed). I felt like they tried to put too much into one single film and neither story got enough time to fully develop itself. Hak Bak Do was an average film about an undercover cop who tries to find back into daily police life after spending eight years among criminals. Night at the Museum was a predictable comedy with a few laughs and very good computer effects. Plus it featured Robin Williams which is always a good thing.