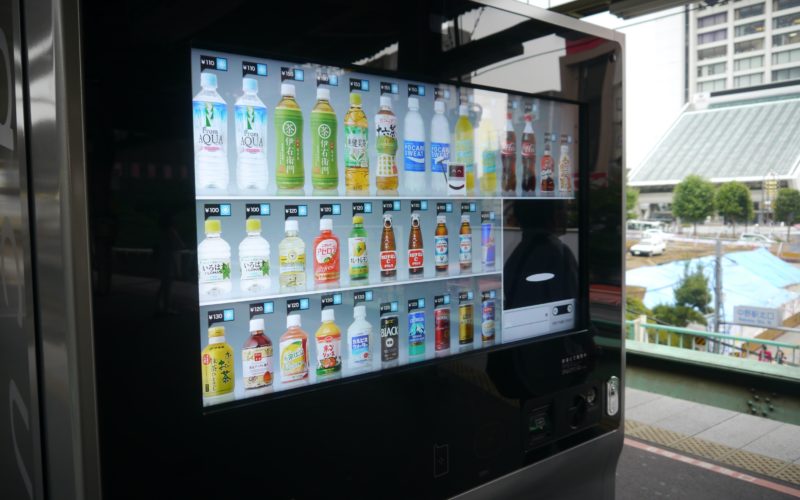 When I went to the small and cozy restaurant Govinda’s in Nakano, I noticed that they had replaced one of the vending machines at Nakano station with a new one that uses a big screen instead of the previous ones which didn’t use a screen.

The makers of vending machines are continuously innovating their machines and they also optimize the energy consumption. Today’s vending machines don’t cool their drinks 24/7. Japan is all about convenience so those machines are at (almost) any corner. The selection is also much better: Whereas in Germany there are usually only four different drinks (IF you find a vending machine), in Tokyo there are over ten drinks to choose from – and there is often more than one vending machine at one place. When I visited Germany, I often wonder “now where do I get something to drink on a Sunday?” (gas stations or shops at train stations).

While drink, snack, tobacco and book vending machines are common, other types of vending machines are not. If you don’t know where to look, you’ll never find those vending machines that sell living lobsters or (supposedly used) panties. While it is true that you can buy almost anything from vending machines, those exotic ones are hard to find and therefore not really convenient. Besides, selling used school girl’s panties has been illegal for some time now.

Array of vending machines in Tokyo

I think that people who put exotic goods in a vending machine usually do it for the media coverage and novelty factor. No one in Japan buys rice, lobsters or other exotic goods from vending machines regularly. The existence of the machines does contribute to the image of Japan in the West, that the country and its citizens are “weird”. But you can buy all those things (and used panties!) in the West too – so how can Japan be considered weird?