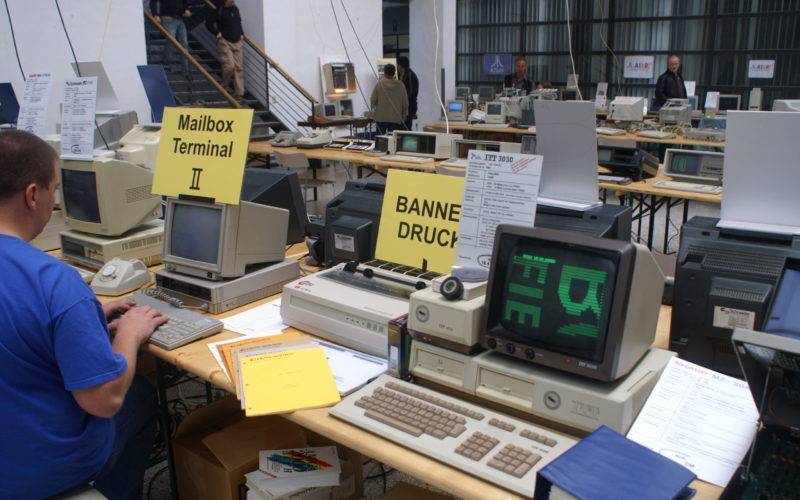 Those retro events seem to be always in place I’ve never heard of. Moers is in Northrhine Westfalia and not very far away from Duisburg. I went to see the Classic Computing 2008 held by the club for preserving old computers. A short bus trip to the industrial park and I arrived at the show. It’s apparently not big enough for the organizers to put some signs from the bus station to the location (the bus doesn’t stop in front of the hall).

The show consisted of two halls. One hall was largely dominated by heavily upgraded Amiga computers with three game consoles (SNES, Saturn, Genesis) and an Acorn 3000 (mainly popular in the UK) thrown in.

The bigger of the two was much more exciting because there were more systems to try out. There was an old IBM-PC connected to a tape-recorder which I’ve seen for the first time. Popular machines such as the Amiga 500/1200, Atari XL, Spectrum 48K, Apple IIe, Commodore 64, Amstrad CPC and Atari ST were there. Commodore’s early business computer were lined up opposite the Atari computers.

The Commodore computers sold best before the introduction of the IBM-PC and were successors of the original PET 2001 computer. They are an impressive sight with their 70s futuristic design. Atari didn’t have an equivalent computer at that time, though the Atari 800 was also used for serious application.

Not every computer was connected to a TV set or monitor. Most of the MSX computers for instance were just there to look at. MSX was an attempt by Microsoft, many Japanese and a few non-Japanese companies to take over the home computer market with a common standard. Unfortunately the standard was already outdated when the first computers were released and they didn’t decide on a floppy disk standard creating an absurd situation where drives were available in common and not-so-common formats. In Tokyo you can find boxes full of MSX computers at retro stores but in other parts of the world they aren’t that common.

It wasn’t a trade show and selling items was prohibited. However, at least some people found a loophole: Just go outside for a cigarette break and then make the deal. Those dangerous computer games like “Mickey in the Great Outdoors” or “Cookie Monster Munch” can be really dangerous, you know 😉