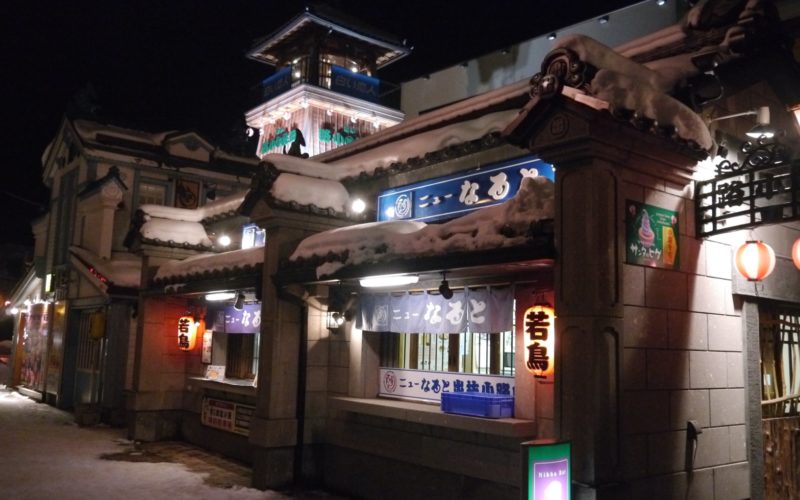 There is one other city in Hokkaido I visited during this trip to Japan: Otaru. Otaru is close to Sapporo and can be reached in just 40 minutes via the Hakodate Line from Sapporo Station. The city also has its own snow festival which is supposed to be less commercial – whatever that means. Unfortunately, I spent more time at the Historical Village of Hokkaido than anticipated and arrived in Otaru after 6pm.

Otaru has a population over 130000 but I guess many commute to Sapporo for work. I got off at Minami Otaru Station which is a good start for a roundtrip. The immediate area around the station was quite sleepy, but my first destination, Marchen Square, was just a short walk away.

On the way to the square I passed “Kinderlieb”, a hands-on toy store with a German name. “Märchen” is German for fairy tale. On the square (which is more like an intersection) there is a steam clock in front of the music box museum. The clock is activated every full hour:

Otaru has a well-preserved historic street and may also be called the Venice of Hokkaido.Not because of the number of bridges, but because of the canal decorated with oil lamps and Otaru’s glass industry tradition. Even today there are more than ten glass studios in the city. Major glass manufacturer Kitaichi owns a couple of shops and restaurants and the Museo dell’arte Veneziana (Venezian Art Museum). You can dress up in a Venetian dress or carnival costume in the museum.

Otaru has designated scenic areas of historical and cultural importance for preservation. One of these areas is the Sakaimachi Street. The buildings are used today as gift shops, restaurants and glass factories. Also, there is this character shop which seemed out-of-place:

Otaru gets many tourists from Russia which is why all historical sights are explained in Russian in addition to English, Japanese, Korean and Chinese.

In the evening all stores are closed obviously which was to be expected. Around the canal, I saw more tourists. Otaru Canal is Otaru’s most visited tourist destination and was completed in 1923. The city was one of Japan’s most important ports until the mid-20th century. The historic buildings were all built during Otaru’s trade dominance. There were plans to fill the canal to create a road, but those plans were revised after protests. I guess nowadays no one can imagine that they were actually planning to remove one of the landmarks of Otaru, but in the 50’s and 60’s there were many examples where the old was removed to make space for the new. In this case, they found a compromise: Half of the canal was used to build a road, the other half was left.

With changes in international trade and the loss of its previous importance, Otaru repurposed the warehouses lining the canal. The houses are now used by restaurant and various shops, the side facing the canal remained unchanged.

Obviously, I could only visit a part of what Otaru has to offer. I’d love to visit the music box museum and make my own music box! If you visit Sapporo for the snow festival in February, you should make a short trip to Otaru to see the Otaru Snow Light Path (小樽雪あかりの路), when the city and especially the canal area is decorated with snow candles. This year’s festival is held from February 3 to 12, 5 to 9pm.

I walked to Minami Otaru Station to take the train back to Sapporo. Usually it would make more sense to start there and then walk to Otaru Station from the canal. However, I had to record the Steam Clock on video. The christmas tree at the station somehow reminded me of that old Charlie Brown Christmas movie: 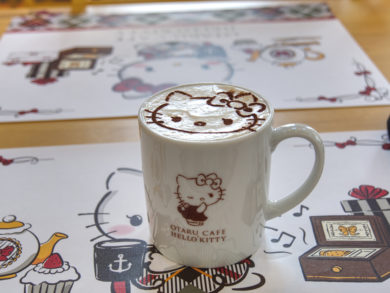